As a professional adult, I am able to purchase things I want, when I want them. So, when we decided to visit my family for Christmas last year, I told my family not to buy anything for me.

My mother insisted, “You have to have something to open.” I kept telling her that was absurd. I’m a grownup, for crying out loud.

But, one night (sitting on the couch with my wine watching Bon Appetite on YouTube, while trying to get more coins on my iPad game) it hit me. My grandmother was an incredible baker. I wanted her recipes.

When I say incredible, I mean people still remember her pies, more than 15 years after her passing. As a little girl, I would watch her measure out flour, knead dough and roll out dozens of pie crusts. She could bake 20 pies in a day. As a treat, during this process she would make me a fried apricot pie. (I grew up in the south in the 80’s. Fried foods for 8-year-olds weren’t taboo then.)

So, that’s what I requested for Christmas in 2018. Six months later, I still haven’t used the pastry blender my mother thoughtfully bought for me. That rolling pin? Hasn’t even left the utensil drawer.

On my quest to find a hobby, this seemed like a no-brainer. I have everything I need, right?

Apples – I don’t think appletini mix from two years ago will work.

So, off to the grocery store!

Turns out, there’s a new one within walking distance. It was a beautiful June day in Dallas, so why not trek the .7 miles there and back? 45 sweaty minutes later, I returned home with sore shoulders from carrying everything in my backpack. Inside that pack: all the items needed an apple pie (who knew you needed two crusts?) and peanut butter fudge.

I separated pie stuff from fudge stuff. Then, I realized I had just started the dishwasher with the saucepan needed for the fudge, and the pie crusts needed five-to-seven hours to defrost. (Insert face palm here.)

After reading recipe for the ‘never fail peanut butter fudge’ I had a few questions. Luckily, I knew my sister-in-law was a pro at this (as witnessed at Christmas), so I texted her. 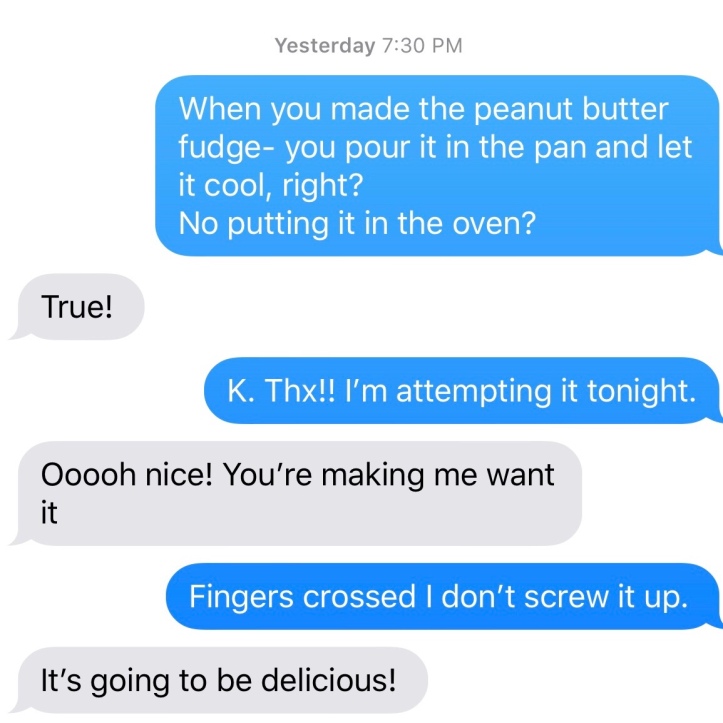 I apparently inspired her, because about 90 minutes later, she texted me a picture of her beautiful fudge, prepared to perfection.

Then, panic. Somehow, I forgot something at the store.

More texting ensued. At one point, she reminded me that the name of the recipe is ‘never fail peanut butter fudge.’ No pressure.

I cut into it an hour and a half later, and…. I failed at the ‘never fail peanut butter fudge.’

The ruling from my taste-testing partner: it’s too soft and gritty. But, it’s edible. Not exactly what I wanted to hear…

At that moment, I realized it would have been quicker and easier if I had just driven three hours to my sister-in-law’s house to eat her fudge.

Takeaway: attempt at baking as a hobby isn’t looking so well for me.