Different can be good, too

Now that my silver leaf art project adorns a wall in my bathroom, it’s time to tackle a more prominent wall.

My former manpanion is a photographer. A damn good one. He is passionate about photography, videography and presenting both in a new and creative way. I don’t share that passion.

Don’t get me wrong, I can appreciate a good sunset, shadow pattern or reflection, but I was never able to capture any of those the way he could.

When mentioning this recently to a friend of mine, she told me something that stuck in my head like a Taylor Swift tune.

“Yes, he’s a great photographer. That doesn’t mean you’re a bad one. Your pictures are good. He sees things differently. You are a good photographer.” There is was: different can be good.

I decided to create a collage of my own photos around one he’d gifted me of a Dallas sunset. I figured ten images should be enough.

As mentioned above, I have thousands of images to choose from. Even under my “favorites” tab, I have nearly a hundred.

So, I narrowed it down to ones that make me smile. Like, a picture of a sunrise over the Grand Canyon I took sitting next to my best friend, and an empty road in the painted desert that serves as the header image for this website. (To see all ten and the stories behind them – scroll down to my Top Ten photos gallery.)

After printing them, it was time to decide the display.

Since I like white and clean lines, I opted for identical white 8×10 frames with matting for a 5×7 image and plexiglass because I know I’ll break real glass.

I unpacked and framed the pictures while watching a Bon Appetit episode of Claire Saffitz making gourmet M&Ms. I tell you that because that episode was 40 minutes. Claire succeeded in the sweet treat before I was done framing.

The puzzle and the supervisor

Then came the task of expertly hanging the pictures in symmetrical fashion on the wall around the large existing photo that would become the centerpiece.

I called a faithful member of my army, my bestie Matt.

While he sat at my kitchen table “supervising,” I laid out all ten frames on the floor. Then, he kindly reminded me I needed to take the large photo off the wall to determine how these new ones would complement it.

That thing is heavier than it looks. It’s on a metal sheet.

Then came the puzzle of what pattern to use.

It was like I was playing “Money Game” on an old episode of “The Price is Right” and Matt was Bob Barker, in his kind, teasing way saying, “No. That’s not quite right.”

Once that was settled (vertical on top), it was time to hang.

To make sure each photo graced the wall proportionally well, we needed to make a map.

I pulled out my “That’s what she said.” notepad and got to work. We measured each frame, the centerpiece, the nail placement and spacing needed between each photo.

Matt took those measurements to the wall, confidently saying, “I don’t really know what I’m doing, but I act like I do.” Umm…

For the record: Matt and I are both journalists. Therefore, we are word-people; not number people.

We started with the left side of the photo wall.

I got the pleasure of holding tape, a level, nails and the hammer while Matt did the physical measuring and hanging.

We used the same methodology on the right side up to the last frame. Was it 30 1/2-inches or 31? After miscalculating it by an entire inch, we realized it was actually 31 1/2.

The top and bottom of the collage were much easier with just two frames each and a defined space already established.

We stepped back (as I tripped over a misplaced barstool) and admired it. 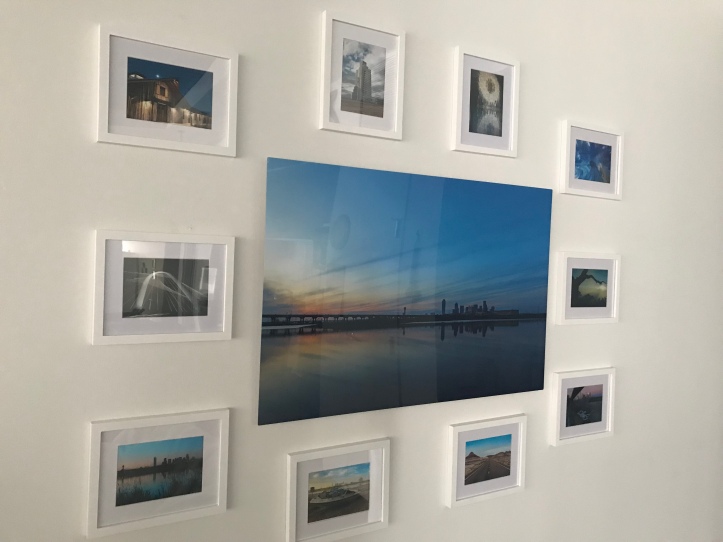