With my success of ‘never fail peanut butter fudge,’ I graced my co-workers with the sweet goodness. They also received the remnants of my first apple pie. Both turned out to be crowd pleasers.

So when the fudge ran out, there was a bit of an uprising. Well, at least that’s how I imagine it. Probably, it was more of a slight frustration for those looking for an afternoon sugar rush.

Regardless, I got the following text message.

Instead of repeating the recipe for a third time, I decided to actually channel my inner Betty Crocker. Time to try chocolate chip cookies from scratch!

Adults can learn too

I’m fully aware that just about anyone reading this has baked cookies from scratch. I am not that person. I didn’t bake my first dozen cookies until Pillsbury invented the pre-mixed cookies. You know, the ones packaged in squares. You break apart the 12 pieces of dough, put them on a baking sheet and in the oven they go! A few minutes later, your world turns into a warm chocolate cookie dream.

Betty’s recipe isn’t for the faint-hearted easy-out Pillsbury cookie bakers. You need a lot of stuff, because her recipe yields 72 cookies. Yep. 72.

A couple of edits

I decided to cut Betty’s recipe in half. That meant doing the math to figure out the equivalent of half of 1 1/4 cups of granulated sugar. And, how in the world do you beat in 1 1/2 eggs?

The recipe calls for an electric mixer. I don’t have one of those fancy Kitchen Aid mixers, so I had to pull out the Hamilton Beach hand one.

It also says to put the cookie dough directly on a baking sheet. My Williams Sonoma baking sheet (which at one time, I was so proud to own) has seen better days. I wasn’t going to put dough (or any food) directly on that thing. Side note: can someone make a baking sheet that doesn’t rust or ruin with regular use?

Instead, I lined the baking sheet with parchment paper still in my pantry thanks to my pie crust making experiment.

Since the recipe calls for softened butter, and mine was coming out of the freezer, I decided to put it (with the wrapper on) in the oven via the baking sheet. The 3/4 cups of butter danced in the pre-heated oven for about 30 seconds.

About an 30 minutes later, I thought the butter was soft enough to start mixing.

This was a bad idea. The butter was still too hard, the brown sugar was packed too tightly and my mixing bowl was really large. With those components in play, ingredients started flying out of the bowl and onto my countertop, stove, into my sink and on my foot.

Now that the butter had officially softened, mixing everything together was a breeze. I went with two full eggs, instead of trying to figure out that conundrum. 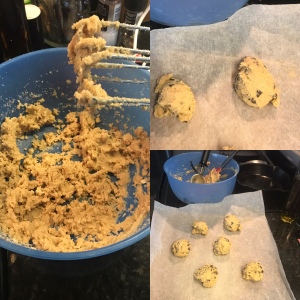 I used an ice cream scoop to drop the dough onto the parchment paper-lined baking sheet. I knew this would make the cookies larger than the recipe called for, so I added two minutes to the prescribed baking time.

When these beauties came out of the oven, I honestly jumped up and down (after I’d put the cookies on a cooling rack). I felt like I had just one first prize at a third-grade spelling bee.

Once the okey-gooey goodness cooled enough, I asked my taste-tester to try them out. Let me tell you, his response made me feel like I’d won first prize at the seventh-grade spelling bee.

With eyebrows raised, eyes enlarged and a mouth full of chocolate chips he uttered, “That’s good.” Then, he went to the refrigerator for a big glass of milk.

Since my edited version of Betty’s recipe only created 18 cookies (12 of which remained after my taste-tester and I dug into them), I decided to try a different recipe for another batch to take to my co-workers.

When I bought the shortening last week to make pie crust, I noticed a chocolate chip cookie recipe on the box. I cut it out and saved it for an occasion like this.

This recipe claimed to make 36 cookies. So, I set off on recipe two in one day. I mean, I’d already won a spelling bee or two, why not go for a trophy?

I did make one edit to this recipe: instead of using shortening, I used butter. Having learned the lesson from earlier in the day, I let the butter sit on top of the warmed stove for 45 minutes. Perfect. 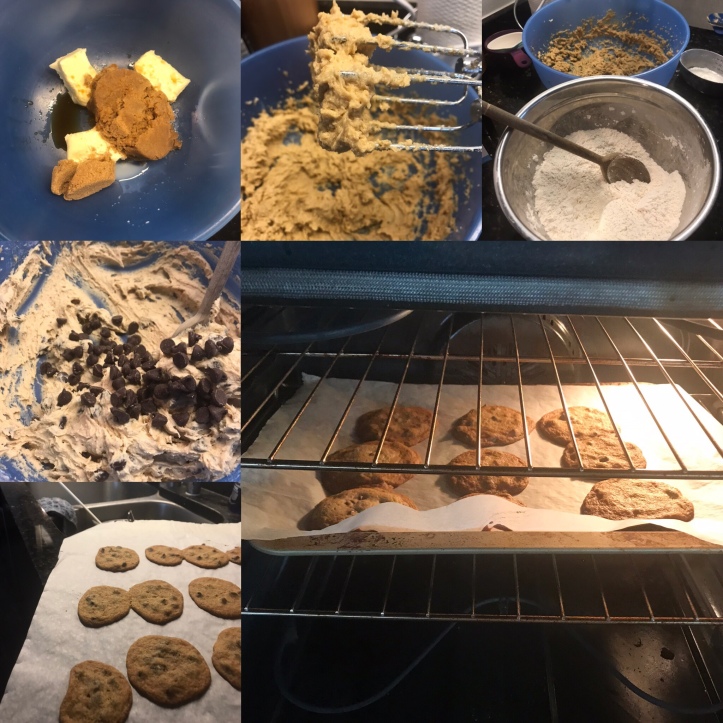 These guys came out a little darker. I believe that’s because this batch was thinner, and the oven had been on for about three hours now.

However, the chocolate cooked well and the dough was cooked through; not burned.

I finally got the proportions down on this one – so this recipe actually created 38 cookies!

With my taste-tester’s approval, I packed up the remaining Betty cookies (eight remaining…) and most of the Crisc-owned ones to share with my co-workers.

Not everyone could enjoy

It turns out a couple of my co-workers can’t eat chocolate. And as much as they appreciated my effort, they had a simple request, “can you make more peanut butter fudge?”

Yes, I suppose I could. But, what happened with that recipe turned out to be a true test of my baking faith. That’s the subject of next’s week’s blog: Sugar, smoke and scrubbing.